Open edition prints are high quality Giclée cycling posters printed on heavy weight watercolor paper. They're printed with archival inks for a lasting beauty, and make great gifts for cyclists and art collectors. All bike art features a full description and story behind the art on individual display pages. 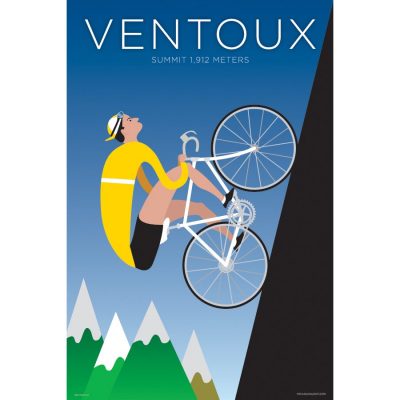 One of the classic big climbs of the Tour de France, Mont Ventoux is beyond category and the battleground for many King of the Mountain show downs.

This cycling poster is an homage to the determination of riders who toil to ascend the legendary climb. 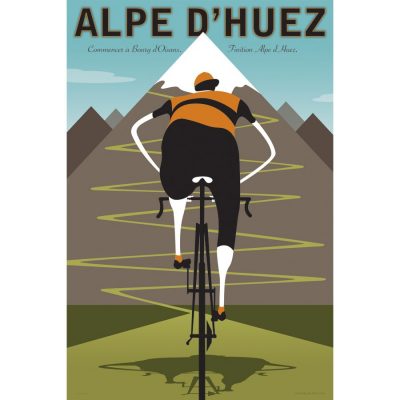 Famous for its 21 twisting hairpin switchbacks, the climb to Alpe d’Huez from Bourg d’Oisans has been a favorite among cyclists for many years. Making its debut in the 1952 Tour de France, this beast of a climb will continue to test the legs and lungs of tour riders for many years to come. 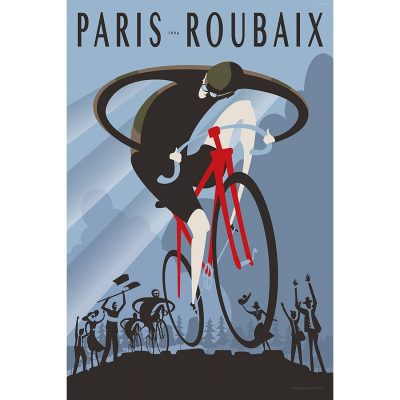 The Paris Roubaix race first ran in 1896 and has been torturing cyclists ever since. It is known as “The Hell of the North” because of the difficult road and weather conditions that rage throughout the area. With cobblestone roads and wind-swept fields, this “Queen” of the Classics is an annual favorite among cycling fans everywhere, and a right of passage for any likely classics champion. 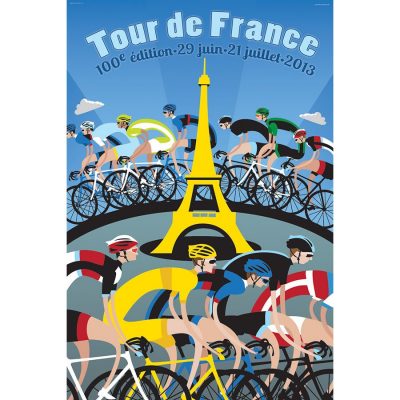 The 2013 Tour de France celebrated the anniversary of the 100th edition of the famed race. Starting in Corsica on June 29 and winding its way around the French mainland, riders arrived in Paris on July 21.

The art in this cycling poster features riders of the tour circling the Eiffel Tower and was originally designed for Velo Magazine’s Tour de France Issue 2013. 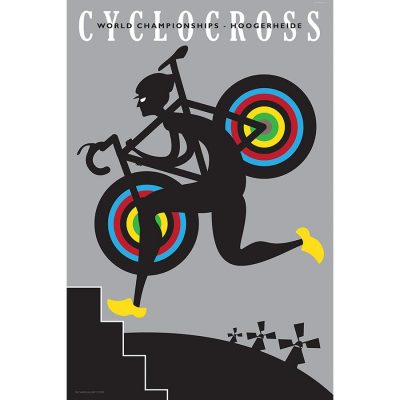 This Cyclocross World Championships poster celebrated the return of the UCI competition to the Netherlands in 2014. Hoogerheide hosted the best of the best in CX, thus a little nod to windmills, clogs and rainbow colored wheels. 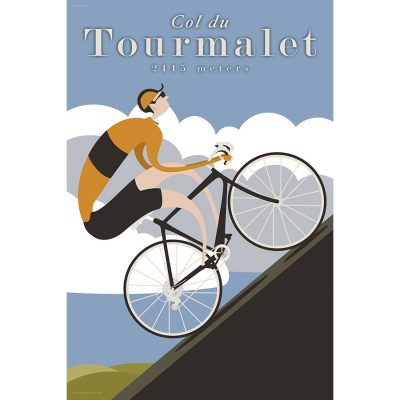 Made famous in many Tour de France stages, the legendary Col du Tourmalet puts riders to the test year after year. As part of Stage 18, racing from Pau to Hautacam, this 145 kilometer stage turns violently upward 95 kilometers into the day. The Col is where true climbers and GC contenders have their final opportunity in the mountains to claim victory in Paris.

Michael’s Col du Tourmalet bicycle print celebrates the famous 2115 meter hors catégorie climb with old school style and grace. As our rider ascends into the clouds, we can only wonder what this grueling road must be like in the heat of competition. 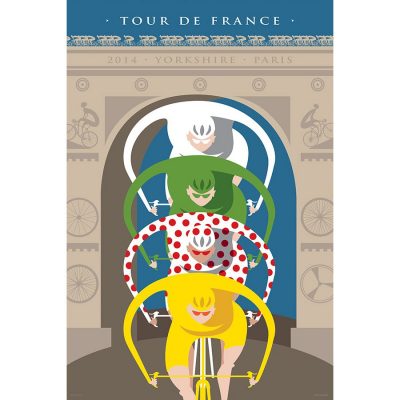 In 2014 the Tour de France began in the UK with its Grand Départ from Yorkshire, on to London across the Channel and French mainland, and ended in Paris.

On the final day of the Tour, riders raced on the Champs-Élysées and around the magnificent Arc de Triomphe before the final winners were crowned.

This original cycling poster shows the overall winner in the yellow jersey, the King of the Mountains in polka dots, the best sprinter in green, and the best young rider of the Tour in white. 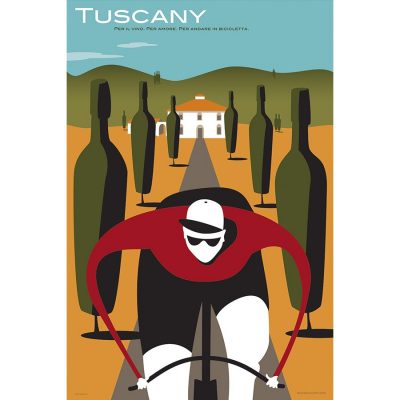 “For Wine. For Love. For Bicycling.”

Tuscany boasts sun-drenched landscapes filled with rolling hills where the wine flows freely all afternoon. Sounds like a slice of cycling heaven to me.

This original Tuscany art print is an homage to one of the most beautiful and scenic regions in Italy, and a favorite European destination of cyclists worldwide. 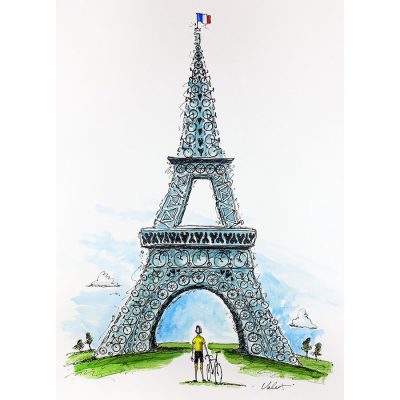 This print is a copy of the original “Tour de France Dreams” ink and wash drawing. The original was a concept art drawing that proved very popular. So much so that I was compelled to create it as a digital print. It may at some point also become a digital drawing, we’ll see on that.

It comes in just one size, 18×24 and is printed on the same heavyweight watercolor paper as all my prints. Very nice paper for framing. 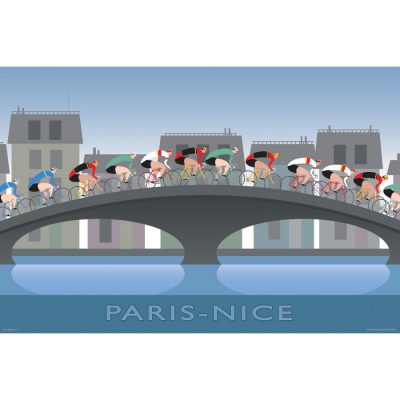 The Race to the Sun

Paris Nice was first run in 1933 and the hilly race remains a big event on the calendars of any pro rider preparing for the Tour de France. 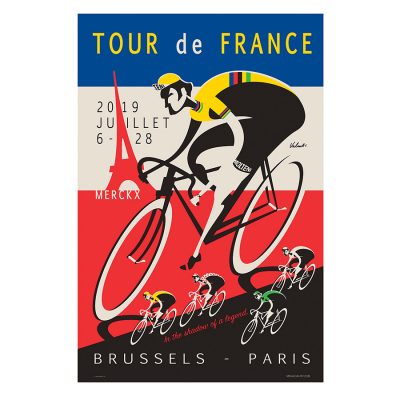 In the shadow of a Legend.

The Grand Depart from Brussels is on the way to Paris, with this years TdF Legend Eddy Merckx at the front everyday of the Tour.

Seeing the great one, in Brussels with my own eyes was the inspiration for this year’s TDF Cycling Art Print. 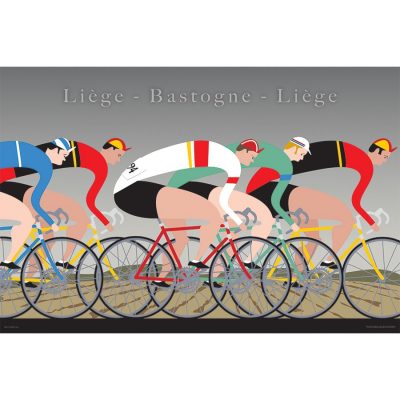 Liege–Bastogne–Liege — also known as “La Doyenne” — is the oldest of the classic races. This bicycle poster celebrates the legendary route that makes its way through the Ardennes region for a grueling 160 mile spring classic torture fest. 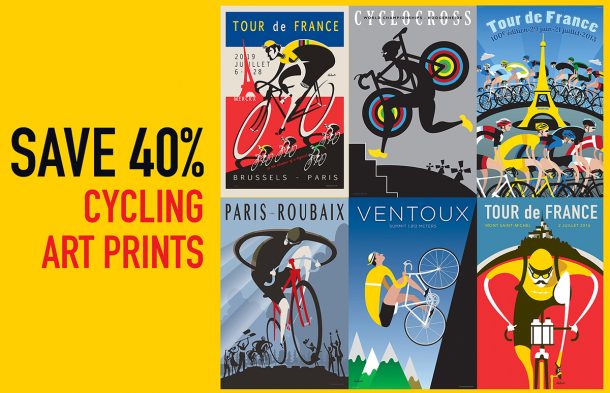 Use the Discount Coupon Code SAVE40TDF to save on Open Edition Cycling Art Prints. Enter your email to follow Michael Valenti's cycling art adventures and for future sales and inside deals.

Thank you! You have successfully entered your information. Check your email for your Discount Code.