Once upon a time…

there lived a very powerful emperor. He was a tenacious competitor and a fierce leader. Strong and demanding but fair and even tempered.

He was well liked and respected amongst his rivals, and as he rose above them he carried the burden with aplomb.

Then one day a marketing genius in his court had an idea,

“We need to the make the Emperor seem more down to earth.” He said. “He needs a new Skinsuit.” 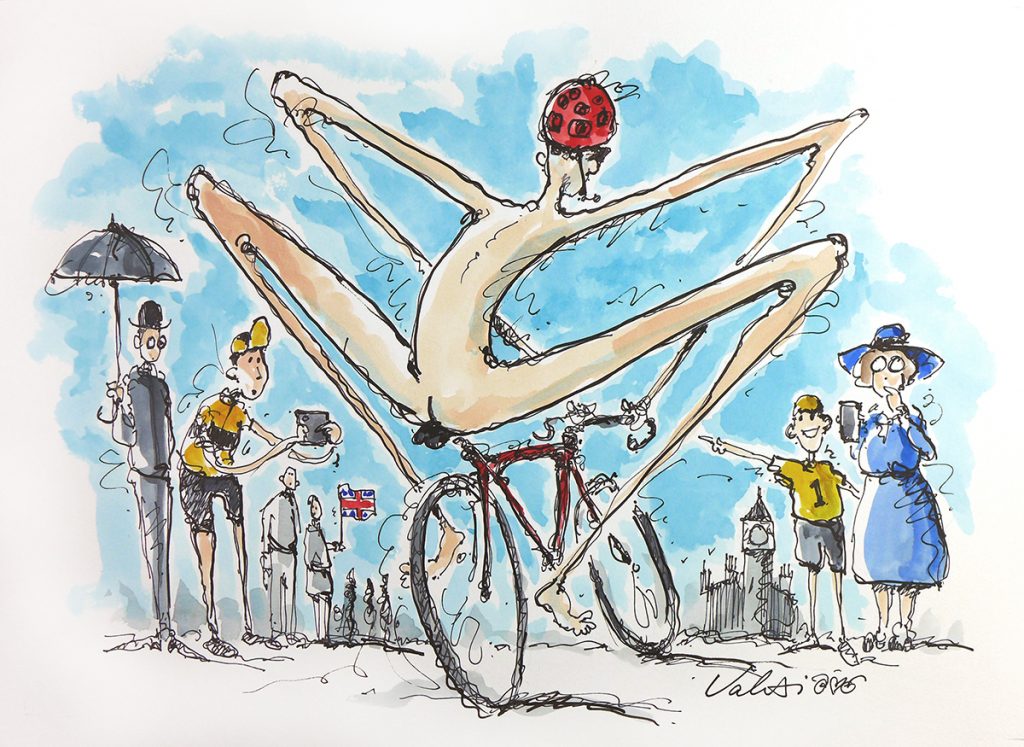 Well of course as luck would have it there was no shortage of tailors that were honored to fashion the new Skinsuit and promised it would make the Emperor look much more human.

Being the trusting and fair-minded leader that he was, the Emperor took the advice of his marketing genius who wrapped him in a brand new cloak made of stupidity. Trimmed with yards of “trust me”, and adorned with fine details made from “research”.

So on the day the Emperor rolled out in his new Skinsuit, he didn’t understand why so many of his loyal subjects were aghast!

“Perhaps they don’t see the wisdom in your new Skinsuit”, the marketing genius said. “Perhaps they are blind to its beauty.”

At that very moment a young fan of the Emperor stepped out of the crowd and yelled, 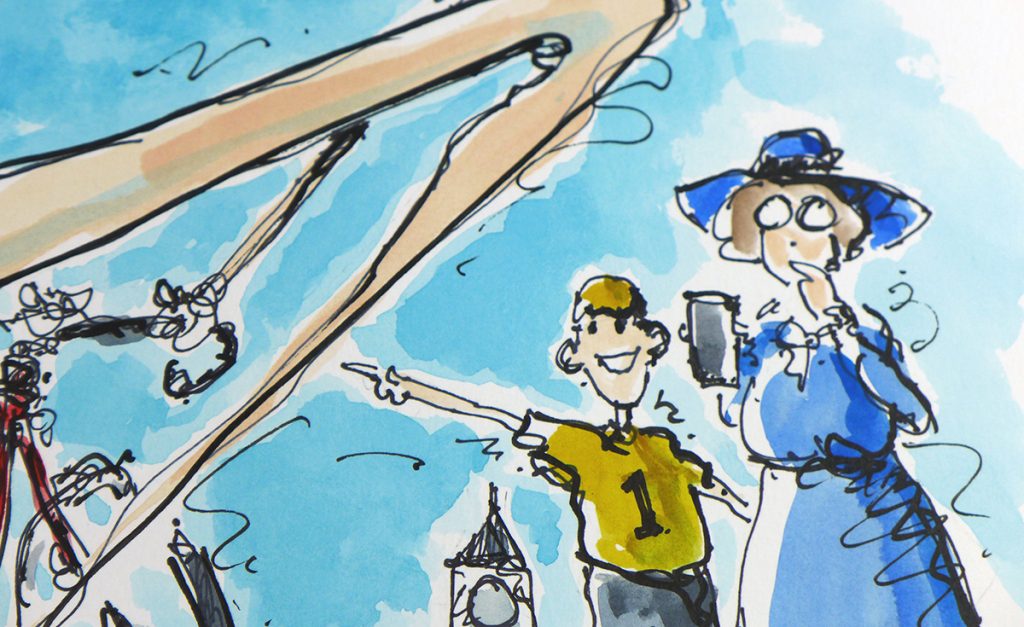 “Look mum, I can see the Froomey bits!”

As the marketing genius ran off dumfounded, one can only pray the words of an innocent child will strike a cord of truth with the Emperor and that he ride back to the palace at a very high cadence and pull on a proper pair of cycling shorts.

To my knowledge no children really saw any Froomey bits but trying to erase certain images from this artists mind has been very traumatic.

Michael Valenti is "The Veloist" - He is an avid cyclist and artist known for his Cycling Art work. Each year Michael chases the Pro Peloton at the Tour de France and other major cycling events. He is available for event and corporate cycling related projects as well as personal commissions for art. 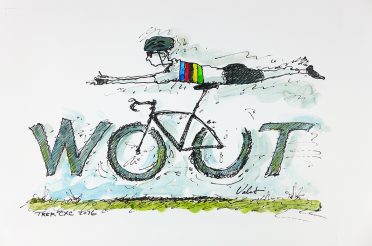 The sun was out and there wasn’t a cloud in the sky but there was... Read More 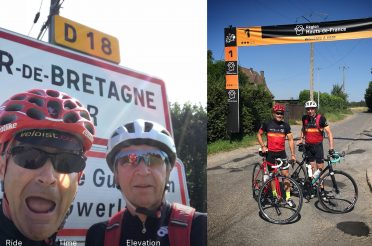 A view from the top. 21 Days of Cycling Art at the Tour de France... Read More 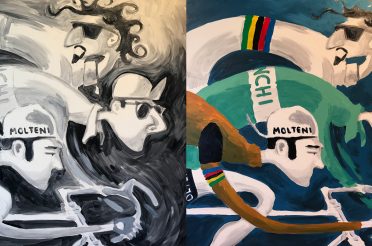 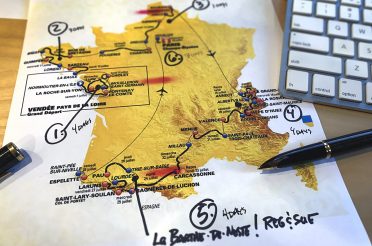 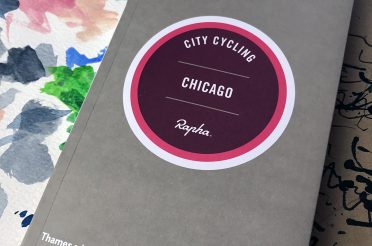 Rapha Chicago City Cycling Guide   If you’re a big fan of Rapha like I... Read More 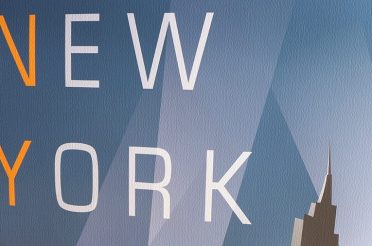 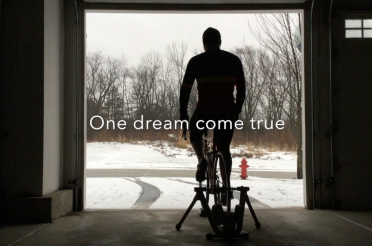 “Dreams do come true” I am training every day now for my trip to the... Read More 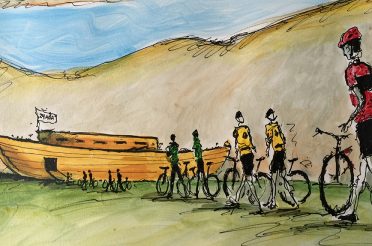 I’m chasing a different kind of peloton today at the 24 Hours of Adrenalin Mountain... Read More

Open
Winter in Wisconsin can be a difficult place to ri

Winter in Wisconsin can be a difficult place to ride your bike unless you find comfort in frozen roads, icy winds and vast rolling landscapes of dormant wheat fields like I do. Slowing down in winter follows the way of nature and I’m happy to oblige. I have a few friends that will brave the elements with me but many rides are made in solitude.

This painting is my first large canvas in my Winter Ride Series of paintings. I’ve completed nine small studies and now I’m scaling up trying to better capture the expanse of the world I love cycling in, Wisconsin.

This painting is 84×48 inches on stretched canvas. The canvas will roll for shipping, some simple assembly is required to display. If you have any questions about this work please contact me.

Michael’s drawing on location work has brought him to over 60 UCI World Tour stages including the Tour de France, Giro d’Italia, Tour Down Under and more.

Private commissions and event design projects for marketing and merchandise are also a large part of what Valenti Cycling Art is all about.

The World is better on a Bike. 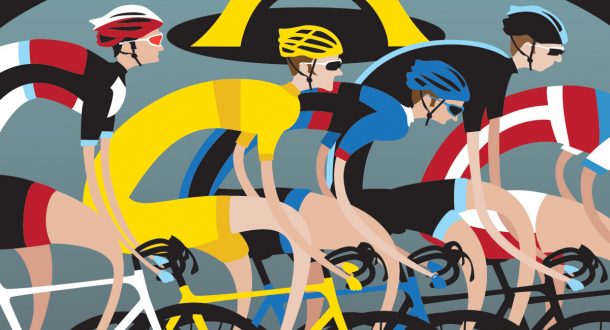 Enter your email here and receive a Coupon Code worth 20% Savings on your purchase of Open Edition Cycling Art Prints right away!

Just check your email for your 20% Discount Code and use it when you check out! You'll also receive occasional emails with additional savings and information.

Your personal information will not be shared.

Thank you! You have successfully entered your information. Check your email for your Discount Code.